The number of container ships waiting for berths at the ports of Los Angeles and Long Beach across the Pacific coastline is growing and has now exceeded one hundred to 101 ships. 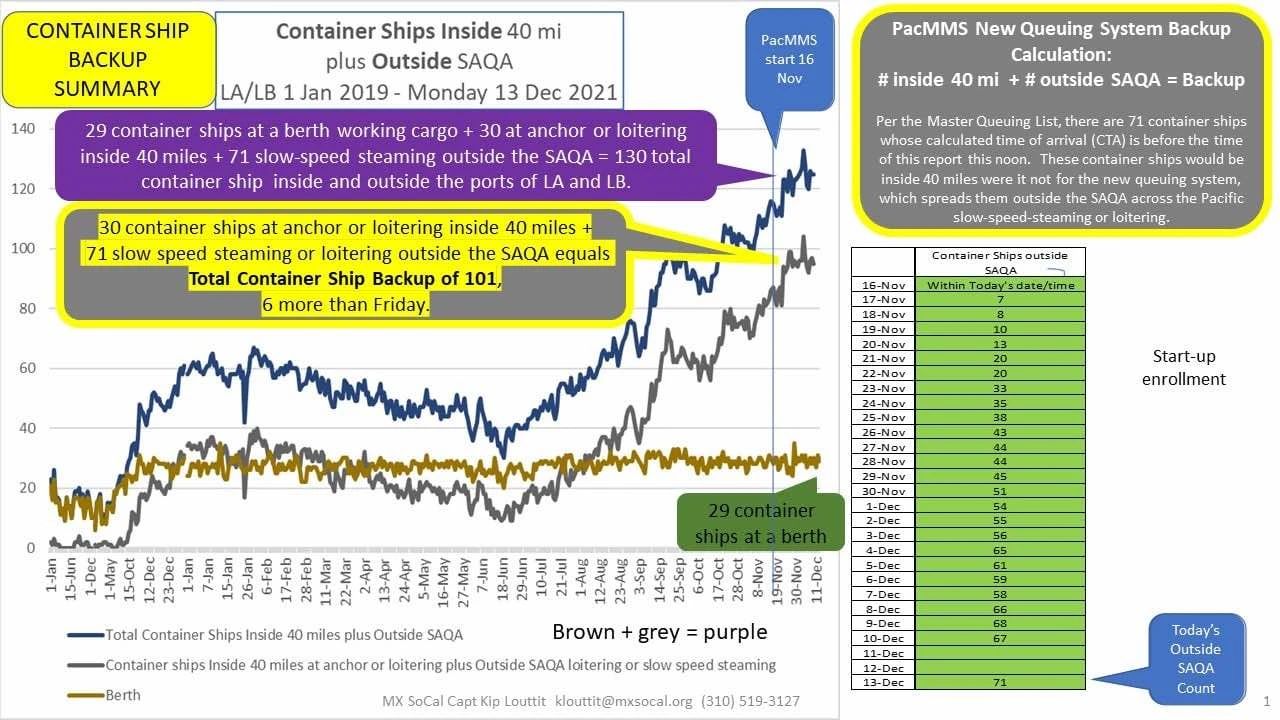 According to the latest data from the Marine Exchange of Southern California (Marine Exchange of Southern California), there are 101 container ships anchored or roaming the two U.S. gateway shipping lanes waiting for berths along the 1,000-mile stretch of North American coastline. Before the outbreak, ships that typically took only two weeks to sail from Asia to North America are now taking up huge capacity due to congestion delays, with some voyages taking more than 45 days at berth. "The Zhonggu Shan Dong has been waiting for berth for 55 days.

While the Port of Los Angeles disclosed that the number of waiting ships shrunk by nearly half in a week, and the fact that congestion has not eased. Last month, U.S. authorities pushed anchorages for ships waiting for berths off the California coast, requiring ships to anchor in waters 150 miles from the coastline. While no one can see the large fleet of container ships, the number of vessels in subsequent congestion continues to grow.

Cross-tracking corroborated by Clarksons' port congestion data and analysis of the Port of Los Angeles' outbound vessel volume data shows that port congestion remains unabated. The reduction stems from the adjustment of anchorage arrangement rules resulting in some vessels not being counted.

The Southern California Shipping Exchange adjusted its anchorage queuing rules on November 15. Under the previous rules, ships waiting to enter port were allowed to wait at anchor within 20 nautical miles of the ports of Los Angeles and Long Beach. For safety and air pollution reasons, the new rules stipulate that, except in special circumstances, ships waiting to berth can only wait in waters 150 miles southwest of California and 50 miles away from California and Mexico, and only ships that have been notified by the port that they can enter the port within 72 hours will be allowed to slowly approach the port anchorage and wait for berthing. As a result, the spacing between ships is widened and the speed of cargo entering the port is lengthened, which leads to further congestion in the port.

"Can you imagine the risk of 101 container ships all converging within 40 miles of Los Angeles during tonight's storm?" The ships are now spread over 1,000 miles, many of them located in relatively calm waters south of the Mexican coast." The exchange said in a Facebook post on the 13th. As of the evening of the 13th, authorities had actually cleared all boats moored in Los Angeles and Long Beach in anticipation of the impending major storm.

In the latest video in his popular YouTube series "What's Happening to Shipping," Sal Mercogliano, an associate professor at Campbell University in North Carolina, points out the extremely long wait times for ships on the trans-Pacific trade route. The video points to the Navios Amarillo, waiting in the waters of Baja, Mexico, and the Maersk Esmeraldas, waiting in the waters of Xiamen, as prime examples.

The 4250 TEU Navios Amarillo left the port of Busan, South Korea on November 17 and is currently berthed in Mexican waters, with a 46-day berth in Los Angeles scheduled for January 2. 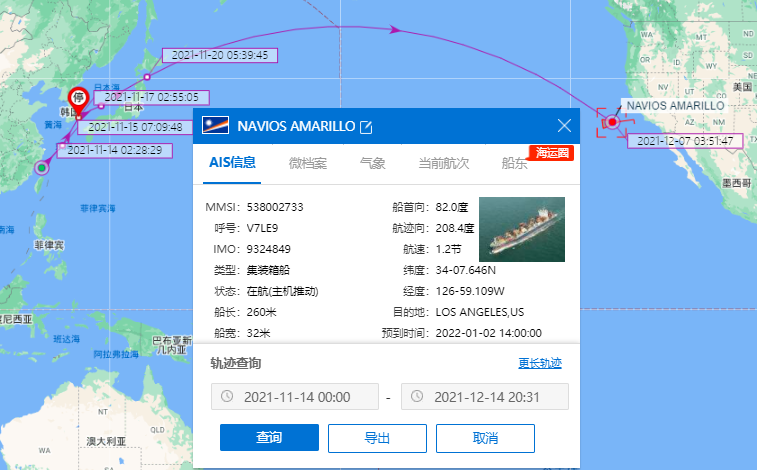 The 13,000 TEU Maersk Esmeraldas, which called at the ports of Hong Kong, Shenzhen, Yantian and Xiamen in late November, left Xiamen two days ago (and actually left the port on Dec. 1) and is still anchored off the Chinese coastline, scheduled to arrive in Los Angeles on Jan. 11. The month-long transit time required is indicative of the scale of congestion on the trans-Pacific route. 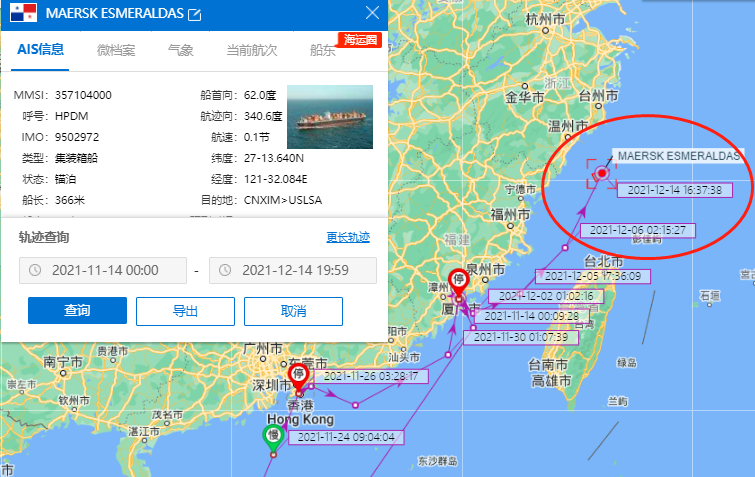 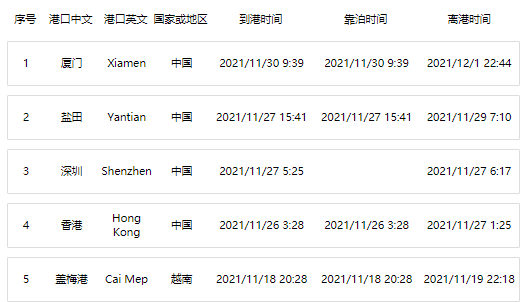 The ports of Los Angeles and Long Beach announced on the 13th that the planned "overdue container detention fee" to be charged to shipping companies will be postponed for another week, which is the fifth time. The fine was first proposed in October, but has not yet been implemented.

With soaring consumer demand to be met in the run-up to Christmas, some importers need to ensure their goods are on the shelves in time for the holiday season and have had to forgo shipping by sea in favor of air.

However, according to statistics, air freight prices to and from major Asian routes have doubled in the past three months.

At the same time, airfreight prices on similar routes, such as the Hong Kong, China to Europe and the United States route and the transatlantic route between Europe and North America, have seen significant increases.

"Everyone knows that if you want merchandise to hit the shelves before Christmas, you have to use air freight." said Yngve Ruud, head of global air cargo at Kuehne+Nagel, one of the world's largest freight forwarders. A freight forwarder said, "The market expects the peak season and air cargo market demand to continue until March next year."

The Financial Times analysis states that air freight prices have soared for a number of reasons:

•The first is that global shipping congestion has caused a large number of companies to switch to air routes to transport products such as fashion items, consumer electronics and parts.

•Second, the widespread spread of the Neocon "Omicron" strain has created a global demand for Neocon testing reagents and personal protective equipment.

•Finally, the global supply chain is extremely busy due to the holidays such as Black Friday and Western Christmas. 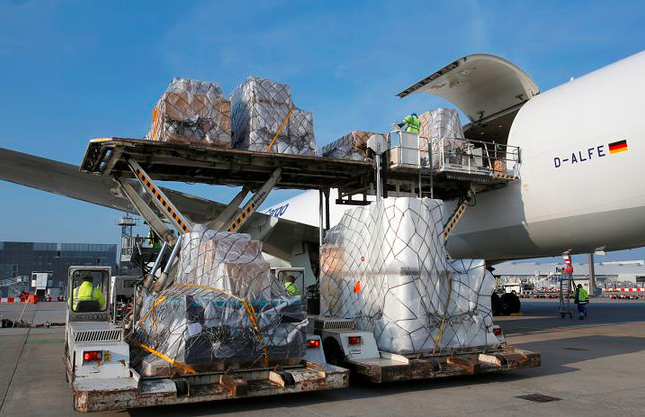 It is understood that some airlines have shifted to undertake air freight operations, and logistics companies such as FedEx and DHL are filling some of the gaps to adequately respond to the growing demand for such convenient but expensive services.

Marco Blomens, head of cargo consulting at Accenture's Sibley Consulting, said current capacity in the airline industry is still 13 percent less than in 2019, while demand rose 6 percent over the same period, resulting in a gap of nearly 20 percentage points between supply and demand. And according to the latest statistics and analysis report, the current chaotic supply chain situation may not be alleviated until the second half of 2022.